NVIDIA’s upcoming Maxwell based GeForce 800M Mobility lineup has been leaked in a roadmap posted by notebook manufacturer CLEVO. The leaked roadmap confirms that NVIDIA’s upcoming mobility top to bottom lineup which would be based around the Maxwell architecture will launch in February 2014. NVIDIA GPU

NVIDIA’s Maxwell graphics cards are highly anticipated by fans of the green side since we have been stuck with Kepler for two years although the GK110 was just introduced in Q1 2013. AMD after a hiatus of two years with their Southern Islands HD 7000 series chips went ahead to unveil their latest Volcanic Islands lineup in October this year and although most of the cards are rebrands, the Hawaii and other chips do offer some mean power for the asking price.

All eye’s are on NVIDIA now as they get ready for the launch of their Maxwell based GeForce chips and although they new chips are aimed towards Mobility users, the desktop chips are still reportedly shipping in March 2014 so we have some time before an upgrade is due on the PC side.

As for the mobility side, the GeForce 800M Mobility series will span all the way from the top tier GeForce GTX 880M and the entry level GeForce GT 840M. So let’s talk about the GPUs themselves, NVIDIA’s first tier chips would be MXM design which means they would be interchangeable, upgradable and even offer SLI support on some notebook designs. Following is the list of the MXM chips:

Next up, we have the entry level models which will feature the onboard design which mean that these GPUs will be permanently soldered to the mainboard hence no upgrading can be possible. The GeForce 800M GT lineup will include the following GPUs:

Update – The specified memory is not the actual VRAM of the chips but the system ram for the entire notebook. The VRAM has yet to be defined by NVIDIA.

Its nice to see the high VRAM on the next generation Maxwell GeForce 800M chips with GTX 880M doubling that of the current fastest GTX 780M GPU. Its not known though whether these chips are actually rebranded Kepler chips or they actually built on the new Maxwell architecture but based on a 28nm process since 20nm around Q1 2014 is not possible for both GPU manufacturers and current TSMC schedules hint at a Q2/Q3 launch of 20nm GPUs. AMD themselves are preparing their Crystal Series Mobility lineup which is based around the GCN Volcanic Islands architecture, codenamed as R200M series and would debut around Q1 2014.

There’s a rumor that the high-end GTX chips could actually feature the 28nm Maxwell architecture from NVIDIA with Unified Memory Architecture (UMA) while the entry level onboard chips may be rebranded Kepler parts. We expect NVIDIA would detail more information on their upcoming graphic card lineups at their event during CES 2014 so stay tuned.

Images are courtesy of Videocardz! 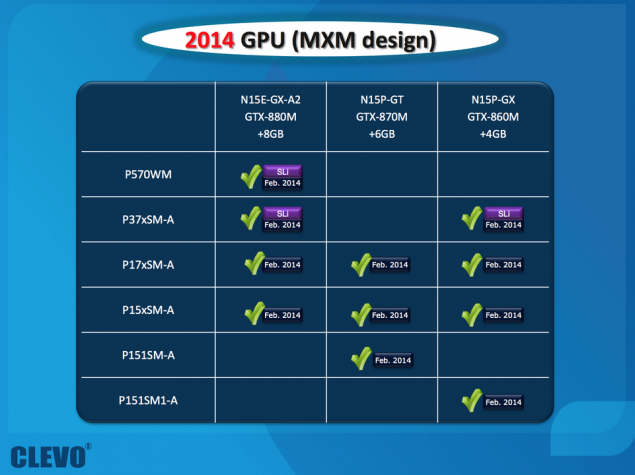 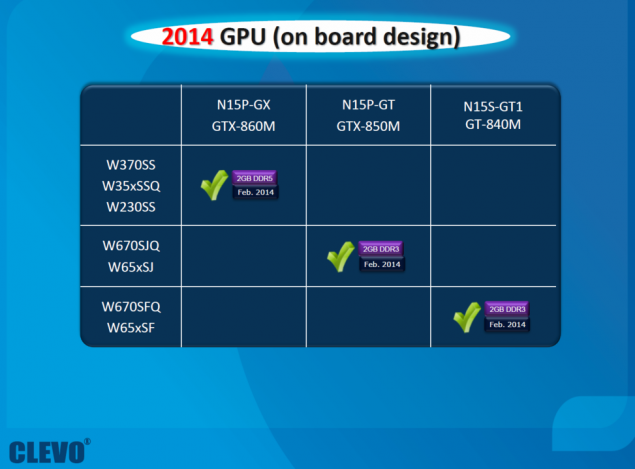